Weather is a safe subject, more so than politics or religion. For some it may be safer than discussing yoga. It's something we experience together.
“It's so hot you could fry an egg.”

“You got that right. My brain feels like that egg.”

The tv is on every morning. When it's time for the weather I completely zone out. I'm not sure if it's the monotonous cadence of the reporter or the swirling graphics that send me to la-la land.

I must be practicing Pratyahara unintentionally. Pratyahara is the 5th limb of the classic yoga path. It refers to letting go of our senses like sound, sight, smell and thoughts in preparation for meditation or deep concentration. Ignoring outside influences in order to quiet the mind.

“What's the day going to be like”, I ask Honeybun with regularity.

“Weren't you listening? He just said rain in the morning, may clear up by noon.”

Considering a lot of what I do is weather dependent you'd think I'd be more attentive but I'm not.

You'd  also think I'd lose attention during commercial breaks instead; but, I like commercials, especially in other states and countries. You can get a great deal of information about local life through advertisements. It's reassuring to know that people in Ireland, for example, promote car dealerships in the same obnoxious way they do in Albany, New York. “Huge” is an adjective used globally and it didn't start with a United States president. We in this world have a lot in common.

I prefer listening to the radio versus a CD in the car for the same reason. Constant chatter means the world and I are still in this life together doing similar things.  Fortunately for other drivers out there I don't zone out as much driving as I do eating breakfast.

Pratyahara encourages us, not only to let go of our senses, but also to let go of the stimulus associated with them. It's not reacting in the same old way to surroundings or circumstances.

For example, not opening our eyes during final relaxation in a yoga class to see who is leaving early and wondering why. Or resisting the urge to look around when someone thumps out of balance. Same kinds of the things cause distraction in church, at the theater or in conversation.

Pratyahara encourages us to be part of the world without necessarily reacting to every little thing. Focusing our attention patiently. Knee jerk reactions make a monsoon out of a spring shower.

Reactions are quick; responses take more time. It's the difference between assuming and understanding or between a tweet and an email.

A 4 year old and I got caught walking home in a rainstorm. She lamented, “ We're going to be drenched rats”. That remains one of the funniest memories in my life. My initial reaction was to laugh but she sounded so miserable; instead, I responded “Great! I've never seen one!” We both began to enjoy our sodden transformation.

Next time the weather comes on let it be background chatter. Accept the day as it comes. If you get caught in a downpour see if you can continue what you are doing instead of running for shelter. I hope we can all agree there is something inherently funny about getting drenched.

Namaste- there's a chance that it will snow today. 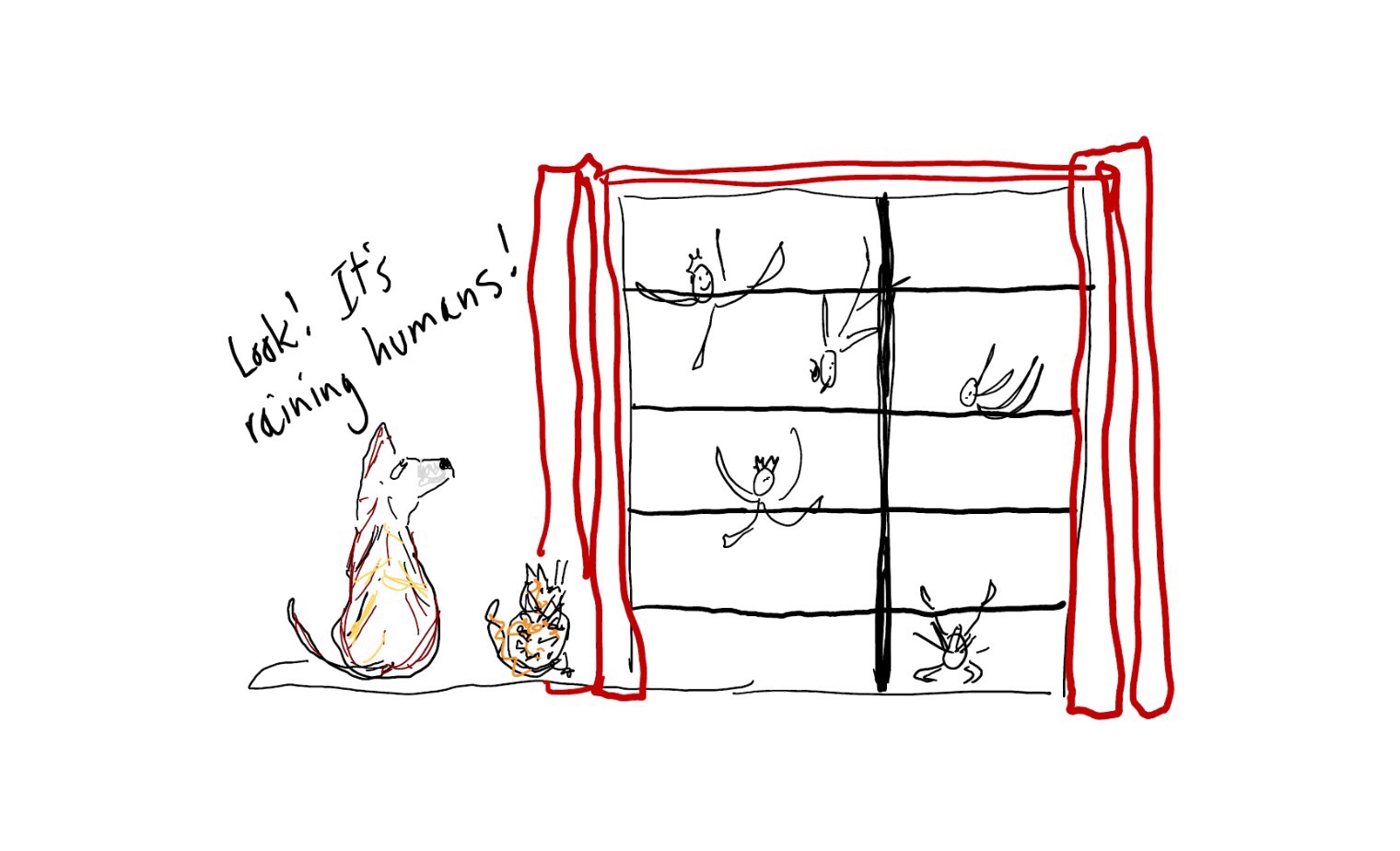 2 thoughts on “Let’s talk about the weather.”