I have a scrap box. It’s more convenient than a scrapbook. Just toss in clippings, photos, a 1/2 filled baby book. Had still has his completed one. Dee is saving her unmarked one for my nieces Who or Loo. Evidently baby books weren’t a high priority.

I’m pretty good at culling through bookshelves and closets but this box is staying intact and current, and will be until I’m dead and gone. My nieces will be fascinated to read that Dewey and I played guitar for the Garden Club when we were in 5th grade. They will wonder why I was wearing a dirndl.

A few decades back the local paper had a front page photo of an adorable, smiling, child forming her first snowplow on skis. Her tips are being held together by a faceless woman, showing a fair bit of her lumbar spine. In the ’80s, short jackets were the most popular and impractical of ski school uniforms.

The caption read “Young skier enjoying the delights of winter, instructed by Alexandra Smith, age 30”. Not only was my rear end named but it was aged incorrectly. I was 29 for another 10 months.

During that time I hung out with the big girls, the ones in their thirties. I was considered the youngster of the group, so always got great advice. My boss and good friend Doji said “When you’re in your 20’s people always ask you what you’re going to do with your life. In your 30’s they figure you know. After that it doesn’t matter”.

What a relief to know that in 10 months I would know…something…maybe. Let’s not rush it.

At 3am when I have nothing better to do, I flip through my mental rolodex of Questionable Behavior and Situations for something to dwell on.

So far I’ve found Rear End listed under the letters R, A, B and C.

Why did the reporter put a name and age to a body part and not to the star of the shoot? No matter how I spin it I can’t come up with a positive reason for her naming my ass. How many people said, “I’d know that butt anywhere”? Was it said in a funny or mean way? I wonder if it was a passive aggressive thing. Then again maybe she had nothing to do with it.

We also have control whether or not we care what others think.

What if  Who or Loo, chuck out the scrap box without looking at it once my ashes are floating around? What if I remain a memory as the aunt who stops by, says hello and immediately checks their frig for leftovers?

What I do know is that I save clippings (for now) to remind me that I am a participant of this world. Perhaps it’s a reminder that I love my family, I love to to teach, I love to ponder. And I love to laugh. It’s all in the box.

I saved an envelope sent to me by my aunt in the ’60s. It was addressed to Alexander Braddersnitch, Dorset, VT!

I wonder if the postmaster said “I always knew Alexandra Bradish Smith was a Russian”.

Namaste- the cat’s in the box and wants to play. 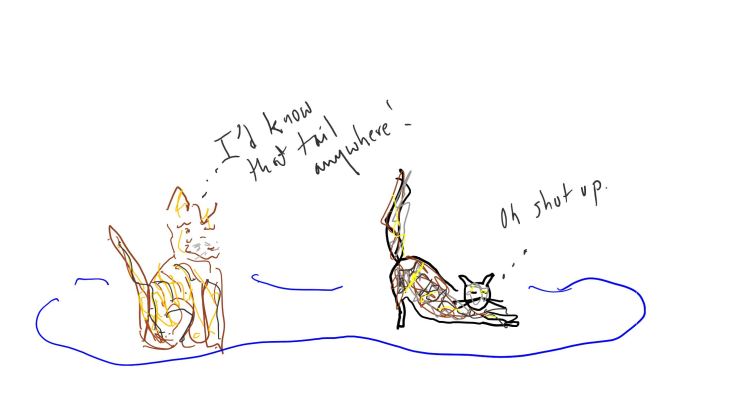 3 thoughts on “Assuming makes one an….,”